In 1996, Charlestown Township purchased twenty acres of the Brightside Farm in order to preserve the land from impending development. In 2000 the township, aided by a significant grant from Chester County, added fifty-five additional acres to the original purchase under the condition that the land would be used as a public park. Aside from what is now known as Brightside Farm Park, Charlestown Township residents have demonstrated their commitment to the environment through an earned income tax devoted to open space preservation. Now slightly less than 41% of the entire township is restricted from development through conservation easements, while the remaining land in Charlestown consists largely of lower density development.

Yet it was in 2021, when a kestrel box was installed on a utility pole within Brightside Farm, that the ecological importance of the park truly began to emerge. During a visit to Brightside soon after the installation, Patty and John Werth of the local Valley Forge Audubon Society spotted a variety of different birds, including a pair of kestrels – an uncommon sight in southeastern Pennsylvania. Over the moon with their discovery, and with the assistance of a member of the Township Planning Commission, Andy Motel, the Werths arranged to lead a bird-watching walk at Brightside that April. During that event the male/female kestrel pair was once again observed near the kestrel box, and the Werths put Mr. Motel in touch with Dan Mummert, Wildlife Diversity Biologist for the PA Game Commission, who is leading a project to expand the conservation of American kestrels in Chester County. When Mr. Mummert later visited Brightside, he was impressed with the habitat there and excited to find four kestrel eggs in the installed kestrel box. Not only had the kestrels hung around, but they had also decided to make Brightside Farm their home. 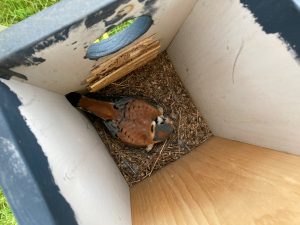 Needless to say, the nesting of these two kestrels was wonderful news for the future of their species here in Pennsylvania, as kestrel populations within the state are declining as a result of habitat loss and a lack of biodiversity. Harmful ecological dead zones, whether we know it or not, exist nearly everywhere. Conventional lawns and large areas of cut grass, known as a monoculture– in which one plant is exclusively cultivated– obliterate biodiversity. These non-native turfgrass lawns are unsupportive of many native insects and prevent wildlife from co-existing, impacting every other animal that relies on those organisms. A lack of flowers and weeds— such as dandelions and clover— eliminates pollinators, which means less food for many birds and small mammals, and thus, leads to plunging numbers of falcon populations. 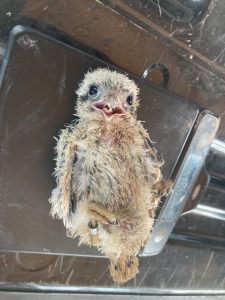 Dan Mummert and his volunteers carefully monitored the nest, and several weeks after the chicks had hatched, banded them for the Game Commission’s tracking program to further protect the birds. In 2022, the township changed its historical approach of cutting fields throughout the growing season– avoiding ecological dead zones by refraining from mowing before ground nesting birds have fledged their young and protecting the land as a grassland habitat for pollinators. These efforts, along with a second kestrel box added this year, allowed two pairs of kestrels to successfully raise chicks in the nest boxes. Charlestown Township is working to develop a ten-year plan, with the help of Resource Environmental Solutions, to create the proper environment to promote native pollinators and remove invasive species at the park. With the spark from Valley Forge Audubon Society, dedicated volunteers, and the unwavering support of township residents, the open space program at Brightside Farm stands as a success regarding wildlife and bird habitat restoration.

Birds and More at Pawling Farm