Lights Out Philly: Skyscrapers will go dark to save migrating birds 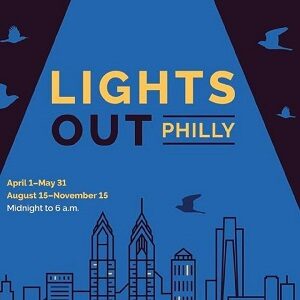 On Wednesday, March 11, Bird Safe Philly announced that the city of Philadelphia will be joining the nationwide Lights Out Program to help protect migrating birds from being fatally drawn to the flashing lights of our skyscrapers.  This initiative was inspired by the mass collision event in October 2020 when more than 1,000 migratory birds slammed into buildings, disoriented by light pollution, and left a grisly display on city sidewalks the following morning. Species most commonly killed during these events are ovenbirds, common yellowthroats, white-throated sparrows, black-throated blue warblers, and gray catbirds.

The program was created by the Academy of Natural Sciences of Drexel University, Delaware Valley Ornithological Club, Audubon Mid-Atlantic, and the Valley Forge Audubon Society and Wyncote Audubon Society local Audubon chapters to address issues that can harm birds in urban areas, especially those that can cause birds to collide with buildings and other human-made structures. You can read more about the program at birdsafephilly.org.

Some of the city’s most renowned skyscrapers such as the BNY Mellon Center, the Comcast Towers, and One Liberty Place among others have already joined the initiative to protect Philadelphia’s native birds. Several other building operators and owners have also pledged to support this effort, while many landlords will be asking tenants to voluntarily turn off their indoor lights.

During this time, all participating buildings will turn off their top lights starting at midnight through to 6 a.m., a measure that will help greatly reduce the casualties.

Philly will now join 33 other cities who have already initiated similar Lights Out programs, including New York, Chicago, Atlanta, and Washington D.C.